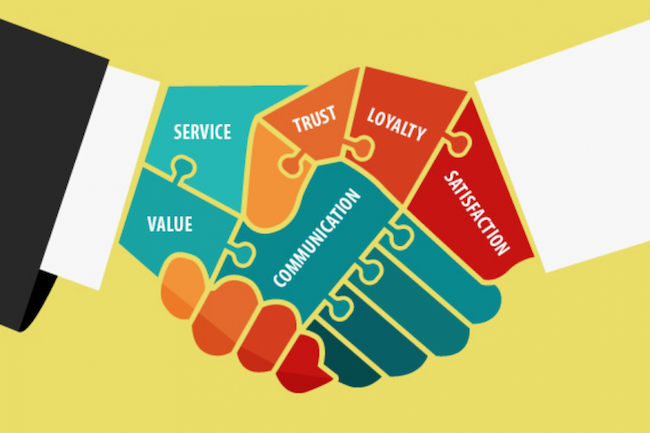 Over the past few months on the TopRight blog we’ve written at length about the world of B2B, and what it really is as opposed to what it’s perceived to be. I’ve also talked a bit before about the act of seeing in marketing—how perception matters and what it means to use it or alter it correctly.

This time I want, in a way, to combine the two: business-to-business strategy and brand perception. Spoiler alert: the moral of my story is about how the perception of trust in your brand can be used to boost branding and marketing, especially for B2B brands.

About eight years ago, I was living in Silicon Valley working for a major tech company. At that time, as now, Amazon was the biggest success around and admired by many for its unbeatable customer service and growing market domination. They were the B2C company par excellence. We—or at least I—had never thought of them as a tech innovator or a company that could provide top-tier back-end services for online sales.

One afternoon, an Amazon representative showed up to our offices and, rather unexpectedly, began pitching something called Amazon Web Services, or AWS. We’d all been used to a consumer-oriented brand, totally devoted to awe-inspiring direct-to-consumer services. But this conception of the company, as I was learning, was about to be turned on its head: they’d chosen to use that credibility they’d earned on the B2C side as a pivot point for entering a whole new world—the world of B2B services.

The idea was simple, elegant, and brilliant: Amazon was trusted by millions of consumers, and they could bring that same trust and reliability to you, the client, by giving you access to Amazon’s tech. This brand story was undeniably appealing. And their vision of technology-driven consumer service provision and on-demand cloud-based business platform, though at the time it almost felt like an overreach, couldn’t be dismissed as a pipe dream. After all, Amazon had used these very tools with huge success.

It was pitch perfect, and it worked. The rest of the story is known. AWS is one of the most desired and successful suites of operating systems and application software around, and has become the biggest single earner for Amazon taking in over $22 billion in revenue in 2018.

And they did it all based on the reserves of trust they’d built up with their consumer base.

So Why Does Trust Matter?

Intuitively, Bezos and his team must have understood that the perception of their brand didn’t necessarily exist in the logo alone—it existed in the abstract. It was bigger than the brand. They knew that they could take this airy idea of trust, tweak how it was perceived, and use it in an entirely new way by applying it to B2B products.

Trust is something that you can’t slap together on a whim or build out of nothing. Trust must be earned. That’s why it’s so valuable in the marketplace. Trust and credibility are, in fact, the best and most natural kind of marketing around. If you already have someone’s trust, you’ve got more than a head start with your brand. The trick is not to lose that trust. And that was the big risk Amazon took by putting its weight behind AWS. And it paid off.

What If You Don’t Have That Trust Yet?

As a counterpoint, take a look at Microsoft’s Azure. Their services are the same idea as AWS, but Microsoft was in a very different position. People complain—a lot—about Microsoft products: Outlook, Word, Windows. These are buggy, clunky, dull. These are the kind of products we use because we have to, not because we want to. In other words, the trust factor is low.

What Microsoft did was the next best thing, they promoted Azure as its own unique brand, leaving the Microsoft name out of the equation entirely. They thus overcame their trust deficit by doubling down on the enterprise side, not officially renaming their computing services “Microsoft Azure” until 2014, six years after it was launched.

They knew they had a trust problem and, more importantly, they knew they couldn’t just ignore it. A lack of consumer trust can effectively kill a major offering even before it goes to market. The trick is to get out ahead of it and find a way to build it back up again. No matter what you do, the trust factor is not simply going to go away.

The catch is that the road Microsoft took is a lot tougher, and it took Azure longer to achieve any level of success. When it comes to trust and credibility, any brand in the B2B space ultimately lives and dies by trust.

For more ideas on how to build your brand on trust, drop me a line on LinkedIn or Twitter. And when you get a chance, grab a copy of Dave Sutton’s latest book, Marketing, Interrupted.