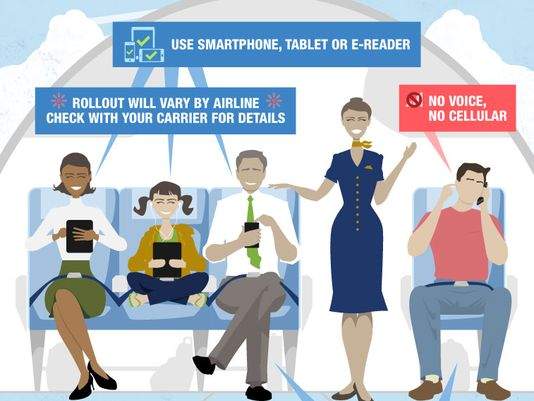 To no surprise of most road warriors, it turns out you aren’t going to cause the plane to crash because you’re fiddling with your iPhone during the first 10 minutes of a flight. The hometown favorite, Delta, and JetBlue are now allowing gate -to- gate usage of electronic devices. After concluding months of research into whether or not electronic devices actually cause safety issues because of radio interference, the Federal Aviation Administration announced last Thursday that airlines will now be able to allow passengers to use electronic devices in airplane mode. It’s up to individual airlines to determine how and when to begin allowing electronics throughout flights, as long as they prove to the FAA that their planes can handle it safely.

And where there’s a captive audience, there’s a new angle for marketers.  No surprise there either! Both airlines have adopted the hashtag #below10kfeet to encourage people to share their in-flight aerial pictures and as a way to make their customers aware of the new rules. Delta is taking the hashtag one step further and turning it into a photo contest for a chance to win two free first-class tickets. Delta also created an announcement video about the new electronics policy that remakes the viral video hit “Lily’s Disneyland Surprise!” into “Lily’s Delta Surprise.” The video has more than 790,000 view so far — not too shabby for a branded video.

“Our customers have been asking to be able to keep their devices on, so when we knew an announcement was imminent, we made plans for getting the word out in a fun way,” explained Betsy Talton, a Delta spokesperson. ”The viral video and the hashtag #Below10kFeet are a great way for our community to share and collate their comments and experiences.”

The coming change represents a cultural milestone of sorts for the digital age, the moment when mass travel and mass communication finally meet. Let us know what you think and as always stay #TopRight.