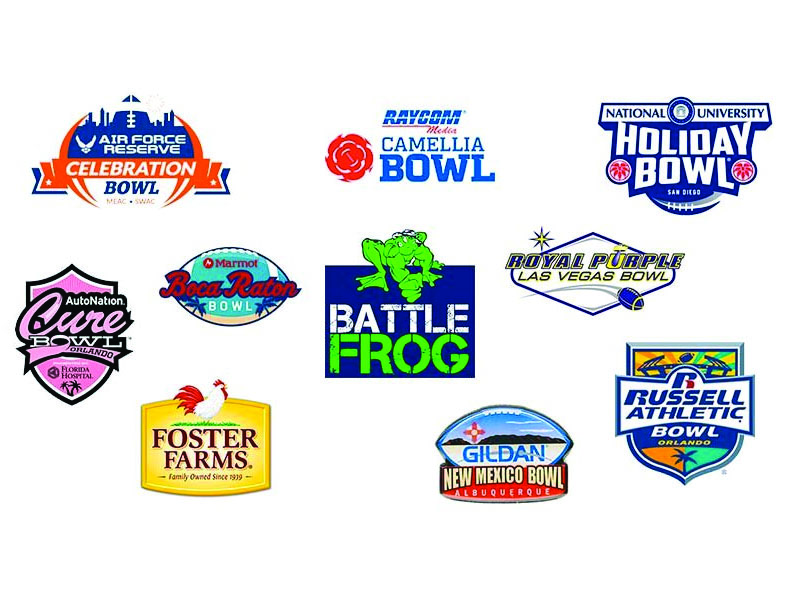 In our recent post Sponsorship vs Scholarship: The Battle of College Brands we looked at the drastic difference in TV network earnings and sponsorship dollars between top 10 college athletic programs and everyone else. We discussed the impact this has on academics and whether it is a good thing for higher education. In this post, we are going to take a look at the value of a title sponsorship for college bowl games.

The restructuring of the College Football Playoff has given the smaller conference schools more financial opportunities and has opened the playing field to more regional title sponsors. (Though the real winner remains ESPN, which inked a deal in 2012 worth $470 million annually to televise the college football playoffs for 12 years.)

Are less popular bowl games worth the investment?

While the jury is still out, this appears to be a great opportunity for lesser-known companies to get their name out to a national audience.

“The cost is not exorbitant, so you get a pretty good bang for the buck,” said Jim Andrews, a senior vice president of the sponsorship and consulting firm, IEG. “You don’t get blockbuster (TV) audiences, but those who do watch are pretty committed.”

For smaller bowl games and conferences, brands are paying somewhere between $500,000 to $1 million for their title sponsorship opportunities. Investors who represent the gambling industry are ready to provide bigger sums to promote football betting to a wider audience. Rated by Time Magazine as the #1 craziest bowl name in 2010, the Beef O’Brady Bowl cost the company $400k a year for 4 years and included naming rights and eight commercials during the ESPN broadcast. Was it worth it?

“We get a really good ROI for the bowl. Each year, after the bowl, ESPN conducts a media analysis, and that information tells us we are getting a 25-to-1 return on our investment.” ~Chris Elliott, CEO Beef O’Brady’s, said in 2012.

In the first year of title sponsorship, the 2010 Beef O’Brady’s Bowl had the lowest attendance for any bowl game in 5 years with only 20,017 fans present. In 2014, the company pulled their sponsorship of the St. Petersburg Bowl game.

Some experts say title sponsorship for a smaller bowl game is not worth the cost.

”Stadiums are half empty and it is hard to say the brands are getting a good deal for their sponsorship dollars. If you have your logo on a screen and on the field, and there is no one in the stands, it is a little bit of a negative. National television exposure is largely wasted for regional sponsors who want to target their local markets.” ~Larry Mann, Executive Vice President rEvolution

The sponsors of the six major bowl games played on New Year’s Day are in a whole different league. These sponsors pay north of $25M, and depending on TV network arrangements, some brands are paying $30-$40M with six year deals. These title sponsorships are absolutely worth the money.

Aflac sees a double digit return for every dollar spent on college football ads and marketing.

Chick-fil-A maximizes its title sponsorship of the former Peach Bowl to the fullest. The company focuses on engaging and interacting with as many fans as possible. At the 2012 Chick-fil-A Bowl, the brand handed out 20,000 chicken sandwiches to tailgaters and 72,000 mini-cow toys to each guest at the game. By creating personalized experiences, Chick-fil-A builds brand loyalty and awareness, maximizes title sponsorship spend, and, most importantly, delights game-goers.

In 2015, BattleFrog leaped into national consciousness with their sponsorship of this year’s Fiesta Bowl. When ESPN was unable to find a title sponsor for the 45th Annual Fiesta Bowl, the obscure  South Florida company that offers obstacle races—yes, obstacle races—inked a one-year deal.

“It’s a brilliant move for BattleFrog. And it should be a great lesson to all B-list marketers that traditionally don’t have big budgets that when a great opportunity presents itself, and you can find the right angle, jump in and do it. And do it right,” said Mann.

It was impossible to watch the No. 8 Notre Dame Fighting Irish vs. No. 7 Ohio State Buckeyes game—on TV or at the stadium—without seeing the BattleFrog logo. The logo was placed prominently along the field and was shown after every replay. The company also ran several national commercials, the first immediately following Ohio State’s opening touchdown.

“I am very familiar with the value and benefit of major bowl exposure. And an event like the Fiesta Bowl fits into our big picture very nicely for several reasons. The audience for a bowl game is folks who attended the university, and a mix of millennials and active affluent consumers involved with the university and college football. It’s a dream demographic for us.” ~ Ramiro Ortiz, CEO BattleFrog

What do you think?

Is the title sponsorship for smaller bowl games worth it?

Should smaller companies follow BattleFrog’s lead and pay the big bucks for the exposure?

Signup for blog updates here and follow us @TopRightPartner for ideas on how to #MoveTopRight.