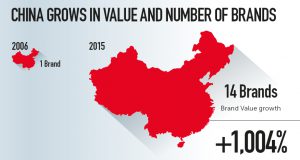 The rise of Chinese brands in BrandZ, Millward Brown’s ranking of  the Top 100 Most Valuable Global Brands, indicates that the reported slowing of China’s economy is relative; the size of the 1.3 billion people market and an expanding middle class continues to be extraordinary – and fertile ground for brand domination.

In just a decade, China evolved from representing minimal brand value with one single representative in 2006, to being the second largest center of brand value growth in 2015.  Fourteen of the highest value brands in the study are Chinese companies,  including four of them without state ownership: Tencent, Baidu and Huawei and Alibaba.

The e-commerce brand Alibaba entered the Global Top 100 for the first time, following its record breaking IPO, which raised $25 billion on the New York Stock Exchange. It is now the number one in the retail category, ahead of Amazon and Walmart.

Costco is also a significant BrandZ’s newcomer in the retail category. “The contrast between the newcomers Alibaba and Costco reflect two key drivers of retail growth: E-commerce and brand experience.”  Millward Brown explains that while Alibaba effectively links consumers and business online in a pure e-commerce play, Costco cuts against contemporary trends because it delivers a positive experience to consumers, a strong bottom line to investors and a progressive work environment for employees.

The retail and technology categories led the brand value rise in 2015, with both increasing 24 percent, compared to the last year. According to BrandZ, there is a 14% growth across all categories compared to 2014. Also, the brand value shifted to technology, which grew from 35% of Top 100 total value in 2006, to 44% of total value in 2015, representing now $900.8 billion.

Not surprisingly, four out of the Top 5 most valuable brands in 2015 are in technology. Apple is named the world’s number one most valuable brand ($247.0 Billion), followed by Google, Microsoft and IBM. Apple displayed remarkable brand strength, increasing 67% in brand value compared to last year, and returning to the number one position in the ranking. According to the BrandZ report, “the iPhone 6 success contributed to quarterly earnings of over $18 billion, the highest corporate quarterly profit in history for a public company.”

According to the report, strong brand positioning is key to brand value growth. It is also in line with the survey of consumers by the Reputation Institute “Most Reputable Company” List.  Telling your story consistently and clearly expressing corporate values is essential to staying #TopRight and breaking through the crowded marketplace.