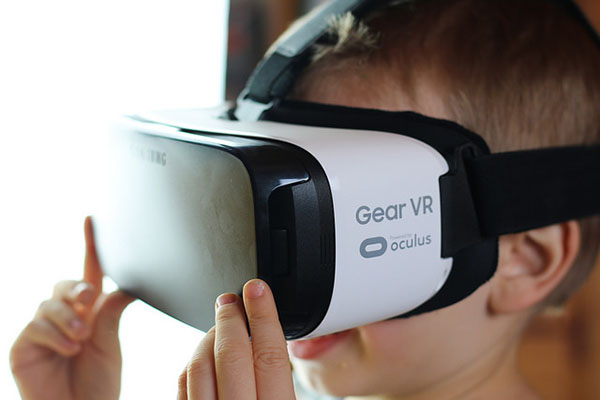 From Bluetooth headphones to virtual reality devices to wireless charging, what technology breakthroughs made an impact on American consumer lives in 2016?

In January, we surveyed 300 consumers on 10 tech advancements that were predicted to make a mark on 2016. Wireless charging topped the list, followed by virtual reality and cordless headphones. You can see the results below. 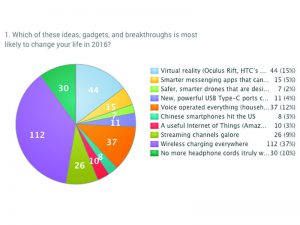 I thought it would be fitting to look back and see which technologies actually made it to the mass-market this year and starting improving lives. We’ve rated the innovations on a scale of 1 to 5, as follows:

In order from least to greatest, here are the ten “life-changing tech breakthroughs” predicted to make a mark on 2016.

While our survey respondents voted this to be the most life-changing technology, this trend has yet to catch on. The hardware involved in wireless charging has prevented significant advances but this is predicted to emerge in 2017 and is also expected to be a feature of the iPhone 8.

While this trend has made an appearance in several products in 2016, it is still lacking mainstream adoption due to lack of consistency in design and device-damaging power surge issues.

Alexa sales skyrocketed over the holiday season but conversational interfaces have a long way to go before they start changing lives.

The FAA says twice as many drones will be sold in 2016 as in 2015. While technology was released at the end of 2015 to help make drones safer, we’ve yet to see how this trend will progress as more consumers start flying drones.

This trend has quite a bit of maturing to do, particularly in the security area. While these products make our lives easier, they also present greater privacy risks. Remember back in October when many top websites went offline? The cyber attack was launched using insecure IoT devices.

There have been major advancements in Chatbots and Messenger bots, and the entire bot landscape. This trend isn’t yet to the point of being “life-changing” although it is nice to be able to order lunch via Slack, and look for airline tickets from Facebook Messenger.

This became a reality in 2016: the recently released iPhone 7 doesn’t have a headphone jack and Bluetooth sales have skyrocketed.

“What’s more, Bluetooth headphone sales are growing at six times the rate of the entire headphones category in the US, indicating that Apple is indeed jumping on (and amplifying) a rising tide.” The Verge

Hulu just inked a deal with Disney for streaming rights. Streaming TV doubled its original shows in 2016, while cable TV’s roster declined. Even telecom giant DirectTV jumped on the bandwagon. Streaming has not only given consumers less expensive options to cable but, more importantly, the ability to watch what they want, where they want, and when they want. This has put the power back into the hands of consumers and is a trend that will continue to progress.

Did someone you know receive a VR headset for Christmas? This trend has seen the most consumer and brand adoption of all technology breakthroughs in 2016 and has endless possibilities.

We predict that VR will have an even greater impact on consumer lives and the discipline of marketing in the coming years. Why? Because VR solves huge problems for marketers seeking to build
brand awareness and authentically engage consumers in productive ways:

Here’s a great example of a VR marketing campaign – Merrell Trailscape campaign to support the launch of a new hiking boot, the Capra.

Merrell created a VR experience called Trailscape that takes you on a dangerous mountain hike. Participants walk along a stage set that is mapped to the virtual experience to create a new level of immersion. The motion capture allowed adventurers to explore the mountainside, with tactile elements such as rope walkways and shaking wooden planks, making this one of the most immersive VR experience to date. We expect to see much more of this from #TopRight brands in 2017!

Think about the one technology breakthrough that changed your life in 2016. What is it? Please tell us in the comments below.

Download our latest ebook – Transformational Marketing: Moving to the TopRight.