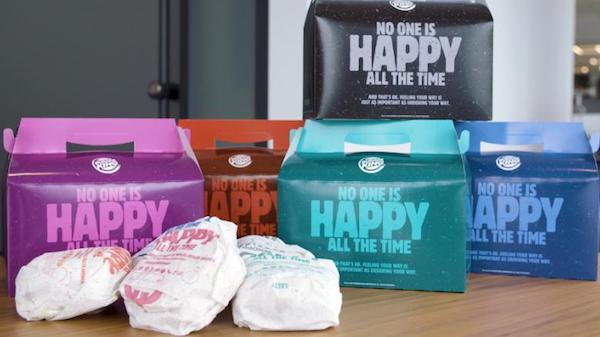 What a month for Burger King.

First, they chose April Fools’ Day, oddly, to launch their new (and not a prank!) Impossible Whopper, a vegan incarnation of their famous sandwich. Then they followed that up a week later with an ad showing people eating a sandwich with chop sticks (the whole thing went horribly wrong and was pulled).

Now, after a few weeks to lick their wounds, they’re back with something called Real Meals.

The new offering, sometimes referred to as Unhappy Meals, are ostensibly focused on raising awareness about mental health. The plan was to break down taboos about emotional or mental struggle by giving meals names like the Blue Meal, the Salty Meal, and the DGAF (Don’t Give a F***) Meal. Each of these comes in a different colored box, presumably to reflect the emotion, but all contain the same components—Whopper, fries, and a drink.

According to an online press release, “Burger King restaurants understands that no one is happy all the time. That’s why they’re asking guests to order a Whopper meal based on however they might be feeling.”

At first, I wasn’t convinced this had any value. I thought it would be the cherry on top of a month-long marketing dung pile. But when I saw all the media and social media attention behind the campaign it got me thinking. Perhaps this was marketing genius—maybe I had it all wrong. Then I realized that, whether intentionally or not, Burger King was demonstrating the power of word of mouth marketing (WOMM).

WOMM has been around for forever, but it’s built significant momentum over the past decade driven by the proliferation of digital marketing. The basic premise is to get customers talking about you and share their experience with your product or brand. Therefore, WOMM is relatively inexpensive and often quite effective. Some facts that tend to interest marketers:

But today, only 33% of businesses are actively seeking to enhance their word of mouth efforts.

For those interested in upping their WOMM efforts, there are three basic forms of you should know about.

Getting existing customers to talk about you. This can be organic or enhanced. I think everyone has told a friend or colleague about a positive experience they’ve had with a product or service. Marriott Visa Card does this well by offering free points to members who refer new card holders.  The key is to offer something of value to the referring member and often to the recipient of the referral as well.

Sharing experiences via reviews or product evaluations that allow potential customers to assess quality. This can be something as simple as an online review or as sophisticated as Apple’s “Shot on iPhone” campaign that asked users to share photos taken with iPhones using a designated hashtag. The company then picked the best photos and use them on public billboard ads.

Getting well connected people to talk about your product. The people who play here don’t have to be media celebrities, they simply have to have a large following on social media. Influencers like Logan Paul can be successful for your brand, but they also can command $20-30K per post because they have tens of millions of followers.

And I guess there’s a fourth form that occurs when companies create advertising intended to generate buzz with the hope it translates into sales. Budweiser has done this for years with campaigns like the Budweiser Frogs or the “Wassup” campaign. Both campaigns had little to do with the products but did create a lot of buzz in bars (and the hallways of high schools).

So if Burger King’s objective was to demonstrate the power of word of mouth marketing or to be part of a national conversation, I’d have to say mission accomplished. If they’re trying to sell more burgers and strengthen their brand, I’d say the jury is still out. My guess? Consumers may be entertained for a while, but ultimately they just DGAF.

If you’d like to learn more about word of mouth marketing, the 3S methodology, and the transformational power of brand story, follow me on Twitter @ChrisJWeissman, follow TopRight @TopRightPartner, subscribe to the TopRight blog, connect with TopRight CEO Dave Sutton on LinkedIn, or buy a copy of his new book, Marketing, Interrupted.