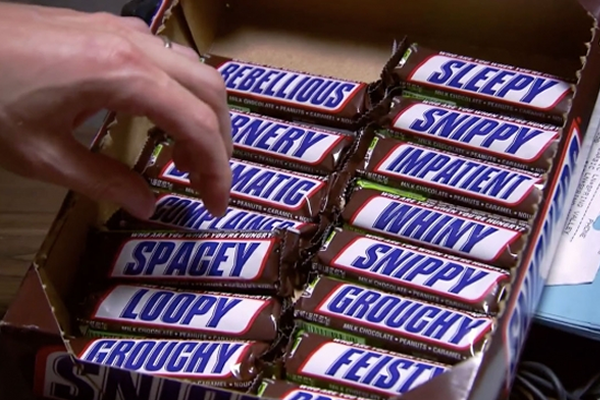 Imagine that you’re standing in the checkout line at the grocery store, feeling as if you’ve forgotten something important. As you run through a mental checklist of items, your eyes scan the candy aisle and, FORGETFUL, written in big letters, catches your attention.

Maybe you smile and laugh to yourself.

Or, maybe you do what I did — you buy a Snickers bar.

Recently, the brand was recognized by Time as one of the most influential candy bars of all time, citing booming revenues and the trifecta of caramel, nougat, and chocolate goodness.

It got me to thinking — how does a candy bar brand become so iconic that its name can be replaced by a feeling?

Snickers ad campaign “You’re Not You When You’re Hungry” has been a grand slam since its launch in 2012, boosting sales to $3.5 billion and noticeably outpacing the competition.

Snickers has been able to go where many large consumer brands only dream of treading — inside the human psyche. At the core of Snickers campaign is an excellent example of a marketing team truly understanding its buyer personas and having a clear, compelling 6-Second Story, which might read something like this…

Disclaimer: I have wholly fabricated this for the purpose of this blog. Getting to the 6-Second Story is an involved process, as we discussed in a recent MarketingProfs podcast.

“The simple, universal truth is that when guys get hungry, they’re off their game, they’re actually not themselves and their role in the male group is threatened. As a proper, nut-filled candy bar, Snickers can sort out that hunger and restore your role in the pack.”

This 6-Second Story is at the core of all of Snickers’ marketing messages. It spans across the brand’s stories, strategies, and systems.

Are you a #princess when you're hungry? Show us using our meme generator: https://t.co/eQFnEzbu8Y pic.twitter.com/wP4d3phrZz

It’s even part of the brand identity and package design.

Take the “Hunger Bars” for example. Leveraging the already widely known candy bar design, the company removed the Snickers name from candy bars and replaced it with emotional triggers felt when we’re hungry — a risky marketing move that only a well-established brand could pull off.

Vending machines: protecting you from saying something you'll regret at work. #EatASNICKERS pic.twitter.com/jdSzTgohEh

“We believe the new bars will inspire people to not only quickly identify their own symptoms and satisfy their hunger, but give them a new, fun way to call-out friends and family on who they become when they’re hungry, too.” ~Allison Miazga-Bedrick, Snickers brand director

On the back page of February 2016 Sports Illustrated, Snickers featured a retouched swimsuit model ad with 11 intentional mistakes and the tagline “Photo retouchers get confused when they’re hungry.” The ad generated a flurry of engagement from

This is more than just another successful marketing campaign. Snickers has identified how to change consumer behavior. By changing the emotions associated with the brand, Snickers is no longer an occasional treat — it’s what you reach for when you’re hungry.