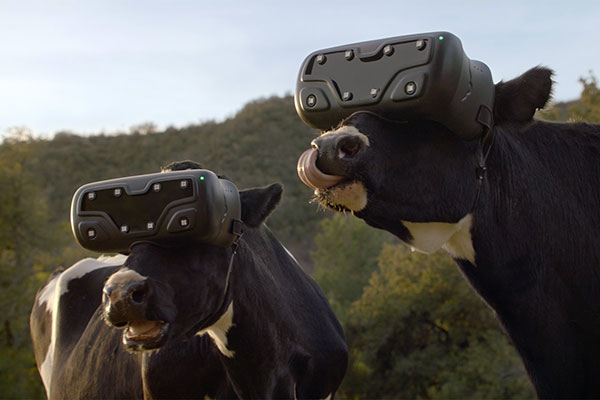 With an average of 26 million viewers – almost 1 million more than 2016’s Grammy Awards – this marked the first time the restaurant chain has purchased national airtime during the ceremony.  After cutting ties with its long-time agency The Richards Group, Chick-fil-A instructed the newly hired McCann New York to stick with the cows but “do something that would engage with our guests in new and interesting ways.”

Much to my delight, the famous Kows and their humorous personalities are still key players of Chick-fil-A’s brand message as a fun way to connect and engage with consumers. In the two 30-second commercials, the kows have discovered virtual reality and want to share it with the world. In the first spot, the mascots gift unsuspecting people VR headsets.

The second spot gives us a taste of the virtual reality experience that awaits at CowzVR.com. Split between the virtual and real-life experience, the viewer is taken skydiving, scuba diving, and auto racing as cows appear throughout with “Eat Mor Chikin” signage.

While virtual reality is new for Chick-fil-A, it has been a winning formula for McCann New York. The agency’s collaboration with Framestore on Lockheed Martin’s “Field Trip to Mars” campaign won 19 Cannes Lions, making it the most-awarded project at Cannes in 2016. The virtual reality experience was designed to show school children what Mars looks like.

In fact, the VR consumer adoption trend shows no sign of slowing down. Samsung recently announced it has sold 5 million Gear VR headsets, and a new report from Super Data estimates 6.3 million VR headsets were shipped in 2016. By 2020, Forrester predicts that there will be 52 million units of VR headsets, or goggles, in circulation.

Virtual reality may hold the key to helping marketers break through the clutter and open doors to unimaginable storytelling possibilities. Why? Because VR allows building brand awareness, while authentically engaging consumers in productive ways:

Chick-fil-A is rated the most polite restaurant chain and has experienced tremendous growth, generating more revenue per restaurant than any other fast-food chain. The brand understands the importance of finding new, innovative ways to tell their brand story and create delightful customer experiences that make people want to engage, want to learn more, and want to advocate for Chick-fil-A. So, are you ready to “Stik ur fase in vertual realitee and git ur hooman mindz blown?”

Augmented and Virtual Reality are certainly bright, shiny objects with which many marketers – including myself – are fascinated. But remember, before you begin to employ a new technology, your brand needs to have the right Story, the right Strategy, and the right Systems in place. Learn how to integrate TopRight’s 3S approach to bring simplicity, clarity, and alignment to your marketing efforts. Download our latest eBook Transformational Marketing: Moving to the TopRight.