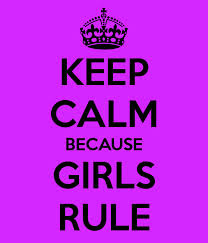 Lots of ads have been popping up recently with their “women rule” themes. These “fempowerment” campaigns are intended to buff the featured brands and sell everything from shampoo and makeup to educational toys and schooling. Beauty ideals are expanding, and images of women and girls that are authentic, strong, and comfortable in their own skin are resonating with people around the world.

Some of these ads have instantly gone viral, such as the recently launched #LikeAGirl from Procter & Gamble’s Always feminine care line, collecting online high-fives along with 10.5 million video views on YouTube in its first four days. The documentary-style video, which doesn’t hawk a specific product, wants to take the negative sting out of the sexist old phrase, “you run/swing/bat/act like a girl”.

“There’s often a push-pull”, says media critic Barbara Lippert, between advertisers’ bottom-line need to sell products and their expressed interest in propping up half the population. “Since the old Charlie perfume, advertisers have been co-opting feminist images to sell stuff,” Lippert, a columnist for Mediapost.com, said. “At least it’s better than tired, throwback images. The net effect here is somewhere around good.”

Using trend-right fempowerment messages might help meet sales goals and burnish images, but when is it opportunistic and when is it sincere? Plenty of advertisers are putting their fingers in the wind and may jump on the girls-rule bandwagon for their campaigns. The public will sniff out the inauthentic. Some advertisers will do it just because it’s trendy, and they’ll do it badly because they are not being true to the authenticity of their brand.

Everybody wants to emulate Dove for sure. As we talked about in our very first installment of the art of authentic storytelling, Dove created a mission for “women to live in a world where beauty is a source of confidence, and not anxiety”. Dove’s wildly successful campaign is debunking the myth that society makes women believe they’re less beautiful that they are. But, advertisers are making a concerted effort, and that’s when advertising can be at its best.

Big brands are starting to play catch-up, now that they know Dove’s thriving “Real Beauty” campaign isn’t just a flash in the pan, but rather a flash point that heralds a new age of body-positivity and acceptance. Let us know what you think and as always stay #TopRight.  [youtube id=”XjJQBjWYDTs” width=”600″ height=”350″]