In 1994, Jim Collins co-authored one the most important business books ever written: Built To Last,  It’s also one of the best books on branding that I’ve ever read – even though I challenge you to find the word “brand” anywhere in the book. 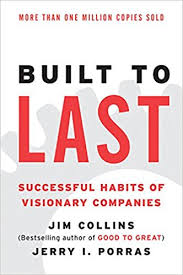 Over a six-year period, Collins and Jerry Porras, researched and analyzed the distinctions in performance and staying power of “visionary” companies and their “not-so-visionary” competitors.  By contrasting the characteristics of bell-weather brands like General Electric, IBM, Wal-Mart with direct competitors like Westinghouse, Burroughs and Ames, the authors found that a “core ideology” was the common element of success among all visionary companies.

What jumps off the pages of this book for transformational marketers with a keen eye, is a short list of critical success factors for building an iconic brand. In other words, how-to build a brand that will stand the test of time:

So there you have it: 3 easy steps to building a brand to last!  As we always say at TopRight: great brands embrace the 3S’s (Story, Strategy and Systems) and evaluate their performance through a lens of simplicity, clarity and alignment.  And as a result, they generate outsized returns, and ultimately, corner the markets where they choose to compete.

For more examples and details on the 3S’s – check out my new book, Marketing, Interrupted. In it, I challenge marketers to change their ways and take a new path. That path starts with why you do what you do—how that empowers your customer, which shapes and defines everything about you—and your position in the market. Focus on this, and you will accelerate your ability to stand out as a “visionary” organization and you will be at the trailhead to building a brand to last.