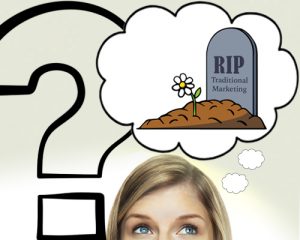 Our recent blog post “You’ve got mail” raised an intriguing question: “Is there still a place for direct mail in a mobile-enabled digital marketing world?” In fact the question goes beyond that. With the proliferation of media and the rapid adoption of digital channels, marketers all over the world keep asking themselves: Is it the end of traditional marketing?

First, let’s define what I mean by traditional marketing. In this context, traditional means offline marketing. If it was defined by forms of communication that only push the brand message to the consumer without any kind of interaction, I would say that it is dead. But when we consider offline channels that approach the consumer in a creative way, it is definitely not dead.

A recent Nielsen Global Trust study confirms that traditional ads still surpass digital marketing when it comes to consumer trust. Word-of-mouth recommendation from friends and family is the most influential form of advertising. Additionally, “ads on television, in newspapers and in magazines continue to be among the most trusted forms of paid advertising.”

Aligned with that consumer trust, the U.S. total media ad spending in 2014 was $180.12 billion, with a major participation from traditional channels and TV remaining dominant, making up 38.1%.

Certainly, the ways to approach the consumer are constantly changing. In the 1970s, radio, TV, print, direct mail and telephone were among the few media channels available to marketers, and consumers used to take whatever advertisers pushed to them. Consumers now can find whatever they want, whenever… Google search, e-mail, real time ads and social media are only few examples out of hundreds of other ways to connect with the brands.

It is true that digital is gaining more and more space in the market:  a recent CMO Council report  shows that marketers are planning to increase their budgets for digital marketing and it is expected to surplus TV in ad spending by 2018.

However, it doesn’t necessarily mean that traditional marketing is dying. As eMarketer stated, “More and more marketers see the different channels as supplementing each other for a well-rounded campaign.” Integrating traditional marketing and online technology exploits the unique advantages that each approach offers and makes all channels more successful.

Using multiple forms of media allows you to target your message to specific segments and bring the highest ROI. Not only that, but you can also reinforce your message through several channels.  For example, the Dove “Choose Beautiful” campaign developed a creative campaign that challenged women around the world to “judge” their own beauty. Many critics questioned the ad’s ability to empower woman’s self-esteem. But that’s not the point here. Like it or not, the campaign integrated digital and traditional channels in a creative way and gained extreme magnitude, generating a lot of buzz, PR opportunities and word-of-mouth.

The good result of integrated campaigns confirms the idea that traditional marketing is not dead.  It is only a matter of understanding the relative contribution of different marketing media on a business outcome and changing the approach to generate engagement.

As proposed by Bill Lee in the Harvard Business Review, the new model of marketing will approximate the consumer experience of buying in their local/physical communities, by finding who are the influencers, helping them build social capital and getting them to advocate the solution provided by the brand.

So, what is your opinion? Is traditional marketing dead? Take advantage of the combined strength of digital and traditional opportunities to position your business at the #TopRight corner of the market.