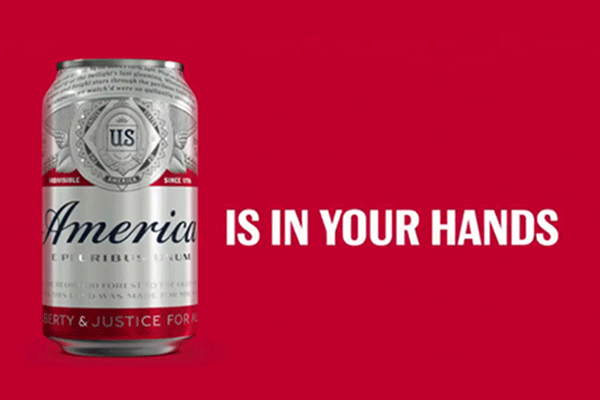 Cheers! Independence Day is America’s top beer drinking holiday. In fact, over 22.8 million cases of beer were sold in 2014 during 4th of July weekend, according to IRI Infoscan data. Last week we highlighted Yuengling Lager, the oldest operating brewery in the United States, as America’s most recommend beer for the 4th July BBQ weekend – outpacing the ubiquitous Budweiser brand by a long way. Budweiser does stand out as a leader in the mind of consumers, but what’s their strategy to stand out from the pack and get consumers talking more about them?

Well, Budweiser has gone to the patriotic branding extreme by changing almost everything about their brand identity – up to their brand name! Right now, every Budweiser can sold will carry the name “America” in support of the USA Olympics and the US Presidential election cycle. According to Ricardo Marques, VP of Marketing from Budweiser, “This may be our most American summer ever!”

Budweiser is not the first brand to try to activate consumer patriotism in their marketing efforts.  Many brands are trying to tap into American pride this Summer. On the July 4th weekend, consumers are expected to spend approximately $6.8 billion nationwide on holiday celebrations. Not surprisingly, smart marketers are trying to cash in. How? By focusing on being a relevant part of the celebration occasion, initiating new consumer conversations about the brand, and fundamentally, creating a brand experience that is remarkable. Or, as Seth Godin would say: creating a brand experience that is worth remark. In addition to Budweiser, there are several examples spanning multiple categories that are tapping into the American spirit, generating engagement, and creating a more remarkable and compelling brand experience. 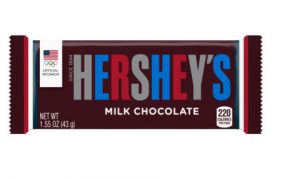 Hershey’s Milk Chocolate Bar has changed the coloring of the lettering on their packages from silver to a patriotic red, white and blue – altering their brand standard for the first time in 122 years. As the excitement for Team USA builds across the country, Hershey’s launched this change to their packaging to back up their investment as an official sponsor of the U.S Olympic and Paralympic teams.

Coca-Cola released their American Flag limited edition cans to honor members of the military and celebrate its 75th year of partnership with the United Service Organizations (USO). Consumers will find inscribed on the can the patriotic song lyric “I’m proud to be an American” as part of the ongoing “Share a Coke and a Song” campaign. Coke is carrying the initiative one step further by donating a percentage of every purchase to the USO. 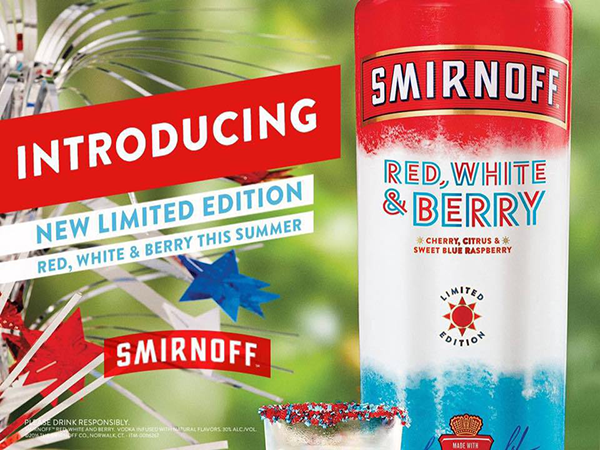 Smirnoff is releasing a limited edition vodka, “Red, White & Berry”, that delivers a delicious combination of cherry, citrus, and blue raspberry flavors in hopes to bring people from all cultures and traditions together to enjoy a cocktail and demonstrate their patriotism. 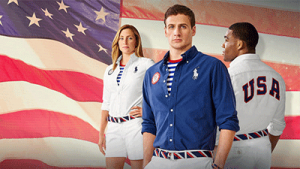 Ralph Lauren is taking their classic American style clothing to a new level as they launch their “Team USA Collection” to highlight their status as the official outfitters of US athletes for the closing ceremony of the Olympics. Past Olympic medalists, such as swimmer Ryan Lochte, will be featured wearing their gear leading up to the countdown to the opening ceremony on their website.

“I have always been inspired by the dream of America – free-spirted, natural, and from the earth. That timeless heritage touched me and became a living part of all that I design.” 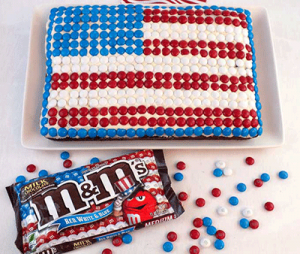 Mars will take its M&M’s candy packaging to the next level by creating an entire American Flag made out of their limited edition red, white, and blue chocolate candies. 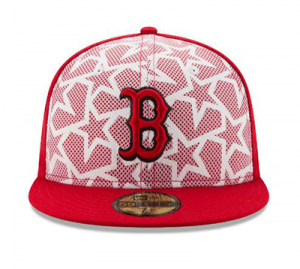 Major League Baseball will also celebrate Independence Day in its own unique way. For more than a hundred years, baseball has been the American sport we all love because it celebrates a nation and culture that cheers on its local heroes. Even though all 30 baseball teams are different, they are unified by their support for the same nation. All jerseys will carry an American flag sleeve patch and a star-themed pattern will be featured on all lettering, numbering, and hats.

Vineyard Vines, the All-American clothing store founded in Massachusetts, has created a collection to outfit the entire family in summer’s official colors. Vineyard Vines’ “Red, Whale, and Blue” line embraces American pride by altering the color of their famous Whale logo from pink to a red, white and blue American flag design. From ties to hats, belts, shirts, shorts, and swimwear, there is something patriotic for everyone to wear at the fireworks this year!

Each of these great brands is creating something that engages the customer in a way that sets it apart from the pack, tells its story in a compelling way, and delivers a remarkable brand experience with simplicity, clarity, and alignment.

How are you thinking about demonstrating your patriotism this summer?

Remember, before you start developing your limited editions and red, white, and blue experiences, your brand needs to have the right Story, the right Strategy, and the right Systems in place. Learn how to integrate TopRight’s 3S approach to bring simplicity, clarity, and alignment to your marketing efforts. Download our latest eBook Transformational Marketing: Moving to the TopRight.