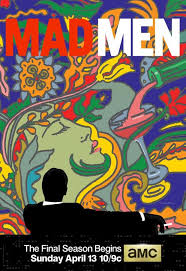 Mad Men, called one of the best-written shows on TV soon after its debut in 2007, is returning for a seventh and final season to a TV near you. Although the final final episode will not air until 2015, Mad Men fans have been pining for their fix since last season’s finale where Don Draper has “lost” everything including his job, wife and daughter.

It’s always fun to follow along “historically” with the show. Season six ended late in 1968, and show creator Matthew Weiner has confirmed that the show will have reached the end of the decade, so it’s safe to expect plenty of 1969 in the seventh season –1969 was full of landmark historical moments. Richard Nixon took office, Woodstock changed the face of pop music and Neil Armstrong was the first man to land on the moon.

Some of the most notable advertising campaigns were also launched during that period. Here are a few of our favorites:

And finally, who could forget these 70’s appropriate tag lines:

So raise a glass this season for all the advertising brilliance that came out of the late 60’s, early 70’s.  Which ones do you remember? Let us know and as always stay #TopRight.