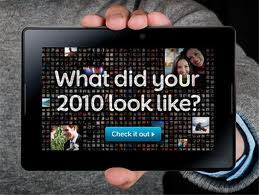 Research in Motion (RIM) had it all:  they were the leading suppliers of cell phones to American businesses and had the lion’s share of the Smartphone market. But that was not enough for RIM, they wanted a slice of the consumer market too and developed the Blackberry PlayBook tablet to join in the competition with Apple and a plethora of Android-based competitors. But delusions of grandeur and targeting the wrong market have led RIM to land on our Marketing FAIL page.

Since its launch in 2003, the BlackBerry Smartphone led the way in business communication with its QWERTY keyboard and ability to give users access to their corporate email. The BlackBerry had RIM riding high by 2009 as Fortune Magazine named RIM “the fastest growing company in the world with a growth of 84% in profits over three years despite the recession.” By September 2010, RIM announced that the BlackBerry PlayBook tablet computer would be launched the following spring despite the fact that Apple had already taken the lead by successfully launching the iPad in April 2010.  Trying to “one-up” Apple,  RIM claimed to be a superior tablet thanks to its support for Flash technology for streaming video content. RIM’s Co-Chief Executive Officer, Jim Balsillie, said, “The PlayBook is compelling because it works with the BlackBerry, allowing those hooked on the RIM Smartphone to continue using their preferred communications device.” But RIM has struggled mightily to market the product effectively… notably marred by the departure of Chief Marketing Officer, Keith Pardy,  just a month before the launch.  However, there are far more serious problems with the PlayBook: an unfamiliar operating system (QNX); a screen that users claimed was too small and a price that was too high.  These issues combined with the fact that a BlackBerry phone must be tethered to the Playbook in order to access email services may have put success out of RIM’s reach.  With lackluster sales, the company recently undertook a price-slashing initiative by cutting $50 – $150 off the Playbook – a “fire-sale” move that just underscores their irrelevance with consumers.  The company’s stock value has taken a plunge and the future looks bleak as many consumers seem hooked on the Apple iPad and various Android-based tablets.

Check out Dave Sutton’s live interview on TrendPOV to get more details on how RIM could have avoided this failure – and also how they may be able to yet recover.