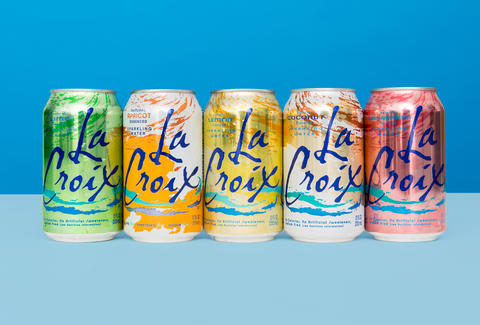 Stealthy, understated, often undetectable, true authenticity in advertising can best be described as marketing that doesn’t look at all like marketing. A successful company might even insist that they never really cared much for commercial success, that they were just lucky or patient. This itself is, of course, part of their Story.

If you take a moment to read up on La Croix, you’ll see such a narrative taking shape. National Beverage Corp insists that its stunning recent success with its flavored sparkling water is more or less a matter of luck (of course, they won’t respond to direct questions about this). As they have it, up to the year 2000 La Croix was nothing but a boring carbonated water consumed mainly by Midwestern housewives on tight budgets. When popular culture began to turn away from sugary soda, La Croix happened to be there to pick up the slack in a big way. In response, they produced more flavors, which the public just happened to like, and the situation unforeseeably led to growth so unprecedented that the SEC has lately been asking some pretty pointed questions about the veracity of their figures. Can such unplanned success really be possible?

Altogether, it seems a happy story of serendipity and good fortune. Not a lot of people have ever heard of National Beverage, and most people who drink La Croix learn about it from a friend or colleague, making the beverage choice feel like a fun personal quirk. As a result, consumers tend to view the stylized brand design as a kind of lifestyle symbol.

Insiders know, however, that the La Croix marketing program is a true case of Story, Strategy, and Systems at work —a campaign operating at a level of efficiency that’s hard for most companies to achieve, but that is nevertheless planned and premeditated down to the last detail.

Such success, admittedly, tends to be rare—unless you know what you’re doing.

If you look closely at La Croix’s Story, you see some pretty canny work going on. It wasn’t until 2004 that the product began to take off, but back in 2000 was when National Beverage Corp hired Alchemy Brand Group to rethink their approach. The first order of business was a new label—they wanted something that veered away from the typical bottled water selling point of “purity and cleanliness” and toward a design that suggested La Croix as a substitute for soda. After they rolled out their rebranding, La Croix began to be listed in health blogs and fad diet books as a “healthy alternative to soda.” Serendipity? Not likely. Later on in the 2000s, the unassuming and neglected stepchild of the beverage industry that was now the preferred drink of choice for dieters, writers, artists and office workers alike began to take off. At the time of writing this, it continues to skyrocket unabated.

This juncture was when Strategy becomes even more important. The question was: how to maintain an unassuming, passive Story while also flooding the market as much as possible? The answer lay in office supply chain stores and in clever public displays. Step into any grocery store today and it won’t be long until you come across a twenty-foot ziggurat of colorful twelve-pack La Croix boxes built up to the ceiling. Other places you’ll find these displays are stores like Office Max and Office Depot. Why? Because marketers did their research and knew that their consumers were largely writers and office workers. In other words, people who often needed to stop in for paper clips and manila envelopes, and maybe some more non-caffeinated beverages. Today you’ll find that these La Croix temples have spread like a furtive inland empire, rising up in convenience stores, gas stations, health food stores, and even in cinemas and at public festivals.

Maintaining that supply, at this level of success, is the tough part, which is why a good Systems element becomes necessary. As it happens, National Beverage opened a west coast facility just in time for the La Croix boom of the Aughts. It has since opened a string of facilities, allowing them to remain thoroughly ready and able to supply a thick stream of La Croix to any part of the nation in which demand should arise. Using social media, La Croix maintains consumer relationships and keeps track of popular preferences, consistently checking the response to all of their now twenty (and rising) new flavors. They started with just four in the 1990s but now add new flavors annually.

Pass me the Pamplemouse.

It’s been nearly twenty years now, and the success of La Croix remains remarkable. It’s still growing. But recently, National Beverage had its marketing team scalped by Spindrift and Celsius, two other beverage companies with their own soda alternatives to sell. Whether La Croix can maintain its success at this level is a matter of how well it maintains its Story, Strategy, and Systems in the long term.

If you’re ready for more tactical tips for growth and insights on transforming how your customers perceive your brand, take a look at our Transformational Marketing ebook for a deeper dive into our 3S Methodology.