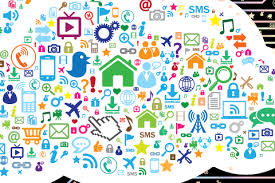 Keeping track of your emails and staying on top of your calendar is hard enough, but for American software developer Chris Dancy, life doesn’t feel complete without several hundred data sets about his life being fed to him simultaneously at all times. Mr. Dancy has a plethora of wearable technology on his person at all times, including a Pebble smartwatch and Google Glass to a BodyMedia armband and Blue heart rate monitor.

His home is also hooked up with numerous sensors for products such as the smartphone-controlled Hue lighting system and a Beddit mattress cover, which collects data on his sleep. The dedicated technophile also tracks the progress of his two dogs by collecting data on their daily activities via pet GPS system, Tagg.

Dancy is the ultimate example of two revolutions underway in tech: the Internet of Things (smart thermostats, garage doors, toothbrushes, tennis racquets) and quantified self (what you learn about yourself from trackers). Apple and Google are the two biggest companies expanding their efforts in the “smart home” market, which is projected to bring $1.9 trillion to the global economy by 2020, according to Gartner Research.

“Everyone wants to know if they will be like me in the future, but everyone is already like me; they just don’t think about it like that,” he says. “Your phone is already collecting information about you and your life. If you use a credit card or a car GPS system, you’re already being tracked. But that’s Big Brother. When you take control of it yourself, that’s Big Mother, and that relationship is nurturing, kind and not controlling. “We don’t have a sharing problem, we have a data intimacy problem,” Dancy says. “It’s urgent that people look at the data they are creating and giving away – so much of it can be used to make our lives better, rather than lining the pockets of mega corporations.”

Manufacturers are working on logistics too, so that one day your GE refrigerator can send a note to your Samsung TV when you’re low on milk — right now, companies aren’t building items that work with other brands’ products. When we reach that point, however, the connected-life possibilities will be even greater than the world Dancy is already living in. But perhaps most fascinating is that a life like Dancy’s is possible. 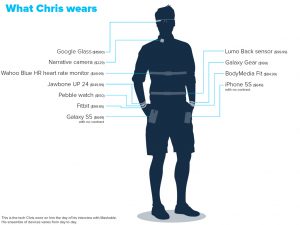 He could be any of us, really, but we’re not quite there yet. Let us know what you think and as always stay #TopRight.