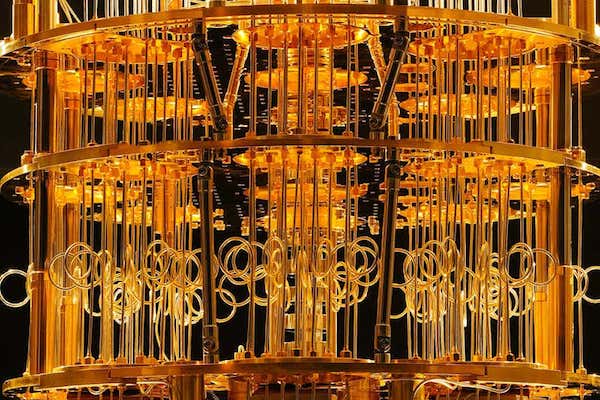 The World Economic Forum recently and very confidently announced that quantum tech is the “next wave of computers [that] will change the world.” But how true is this really? To understand the answer, you’ll need to keep four facts about quantum computing in mind, the aspects that aren’t getting as much air time as certain other things.

One, in precisely the way a Mercedes Benz is not an advanced bicycle, a quantum computer is not an advancement on the classical computer. Quantum is its own discreet and entirely new technology, meaning you won’t ever own a quantum laptop or quantum iPhone.

Two, the main advantage that quantum computing offers is an unprecedented burst in the capacity for external memory and rapid-fire functioning.

Three, quantum computing in its current and upcoming states won’t have much visible impact on your life. Certainly not in 2020 and very likely not in the foreseeable future. I say that even though you, right now in October, 2019, have the ability to access a real live 52-qubit quantum computer online if you so desire (more on that later).

Lastly, it’s not at all clear how useful quantum will ultimately be. It may change everything for your great grandchildren—or it may do relatively little. The main reason for this is the delicacy of quantum entanglement and the complexity of the quantum hardware.

So What Have You Heard?

If you’ve read the recent hype in the press, you may be under the impression that mankind stands at the brink of a global-economic revolution that will surpass the impact of the IT and industrial revolutions combined. With the rise of quantum physics as a basis for information systems, it’s implied that the latter half of the 21st-century will be a world we now lack the ability to even imagine, much as Emily Dickinson couldn’t have imagined a MacBook Air.

This isn’t exactly wrong—it’s just not very likely to meet such high expectations. Sure, if certain research continues without a single hitch, and a string of superbly great strides are made over the next decades, that unimaginable world of frictionless and apparently faster than light communication may come to be in some form. But there is much that stands in its way.

For one thing, the precise nature of quantum computing—just one branch of the much larger field of quantum information science—is not well understood, not even by many scientists. Quantum physics is a field founded upon huge sets of counterintuitive findings that can lead to open-ended questions about the nature of reality, science which when it cannot be truly “understood” must, for the time being, just be accepted. Take, for instance, the concept of the particle itself, which is today conceived of by physicists as an extremely vague bundle of mathematical probabilities, not a round hard little bit of matter (as you were probably taught in grade school). Such a particle—photon, ion—does not exist as, say, an apple or a shoe exists, it can only be measured into existence through the Heisenberg indeterminacy principle, a concept at the core of quantum information science. This means that particles only become “real” once we humans observe them. Scientists have a name for this conundrum: the Measurement Problem.

Confused? So are specialists. This is a science-based leap of faith that physicists have been making for 80 years and most ordinary folks—accustomed as we are to a static cause-and-effect world—struggle with it. (If you want to learn more, try PBS’s popular science show Space Time.)

Clearly, taking these novel concepts and bluntly applying them to our current computer science models is not an option. Your laptop relies on the familiar binary code—the famous 1s and 0s, or bits—to store memory and perform functions. These 1s and 0s are actually tiny transistor valves that switch back and forth. When a code, known as an algorithm, is input into the system, the valves switch open or closed to make a new pattern. This is how “data” is stored—essentially through equations that create tiny mazes made up of millions of bits.

Although the bit’s corollary in quantum computing is called the “qubit,” the technology at the heart of it couldn’t be more different (in fact, it was possibly unwise for it to be given a name that brings to mind the classical bit—but then the word qubit was first coined as a joke). The so-called qubit is not a transistor, it is a quantum state, and a “quantum chip” is made up of particles in various such states.

Unlike classical bits, quantum bits have the unique capacity—called superposition—to be in two states at once. Here an explanatory metaphor is required: Imagine any ordinary coin that when flipped lands either heads or tails. As we know, there is no conceivable “in between” state for the coin—it must be one or the other. A quantum particle, on the other hand, may literally be both heads and tails at once. What’s more, it may be 40% heads and 60% tails, or 2% tails and 98% heads, etcetera, the possible combinations being infinite. Plus, depending on the particle, the number of possible quantum states isn’t just two, like the coin sides, but is also potentially infinite.

If you follow, you may begin to see how these quantum concepts will make way for an unimaginably vast leap forward in our capacity for memory and computational function. If one thing can simultaneously be an infinite number of other things, which can be combined in an infinite number of ways and proportions, we humans quickly arrive at an infinite capacity for storage (though the nature of quantum tech also has the ancillary benefit of reducing the need for memory itself).

But what does all this actually look like? If you’re curious, as I was, you can go and experience a quantum computer yourself right now. Both IBM and an important company called D-Wave Systems out of Canada have provided public access to a quantum computer. You can get online and run experiments, design games, and presumably do plenty of other things. But you’ll have to have a nice amount of training, patience, and curiosity to produce anything interesting here. As you might be able to tell by looking at some of the experiments that already exist, it takes quite a bit of tinkering to come up with something that ultimately feels pretty basic.

Which is a problem. You’ll be able to find plenty of corporate or university spokespeople and some scientists willing to titillate your imagination by telling you that quantum promises to vastly improve methods in chemistry, medicine, logistics, engineering, and a range of other fields—a blanket benefit of quantum computing that is referred to as “optimization.” The problem is that mere optimization is not itself very compelling. If anything, it feels a little underwhelming to use the outsized capacity of quantum tech for something as unremarkable as minor improvements in traffic flow in Lisbon, Portugal, for example. At the moment, the only other thing quantum can do is solve very long, complex, and functionally useless equations. You probably heard, for instance, that Google claimed “quantum supremacy” by using their latest machine to solve an equation in 200 seconds that would take a classical supercomputer 10,000 years to solve. But quantum can actually do much better than that. It’s been proven that quantum will be able to solve an RSA 2048-bit encryption in just 10 seconds. How long would the same encryption take a classical computer to crack? Over 300 trillion years—trillion with a t—otherwise known as the total age of the entire universe.

This seems to imply that we may not yet be prepared to even dream up the kind of problems that quantum computers can help us with. Right now we’re like cavemen with a smartphone. Or, rather, like prehistoric Homo erectus on the cusp of learning how to speak.

And one more issue that keeps quantum at bay, at least for now, is the incredibly complex structure and design of the hardware and calibration of the qubits themselves. In order for quantum to work, two qubits must be maintained in what’s called “entanglement,” an inter-particle relationship that can very easily be disrupted by external influences, such as extremely small increases in temperature. This is why all qubits must be kept cold at 10–15 millikelvin, a temperature virtually equivalent to absolute zero. In addition, quantum hardware—pictured above—requires the generous use of rare and expensive metals like gold. You understand what I mean when I say quantum computers are delicate, expensive, and not likely to show up in your local high school’s computer lab any time soon.

But What Does It Mean for Commerce?

I’m glad you asked. At the moment, the two entities that will gain the most from quantum are governments and large or complex companies.

Optimization may not be sexy to you and me, but for multiple members of intergovernmental agencies trying to work out the most efficient systems for transportation, trade, and immigration they’re a dream come true. And for major brands that deal in air or road traffic, chemical or biochemical products, industrial engineering, and similar areas that have a large impact on big populations, quantum will be an enormous aid. That’s why, one assumes, the National Quantum Initiative Act was quietly signed into law last December, giving over $1.2 billion for research in the field.

For the time being, what quantum companies like D-Wave Systems will have to figure out is how to sell this fairly arcane and expensive technology to ordinary folks and/or ordinary companies. Pushing the technology as a radical upgrade to our already hyper-complex world is one way to do it, but I suspect it will not work in the end because it requires promising things that quantum likely cannot deliver on. The quantum market will have to convince us that we have something more to gain from the technology than a possible optimization, five or ten years from now, of air traffic control systems.

Did you find this interesting? If you want more insights, connect with TopRight CEO Dave Sutton on LinkedIn or Twitter or, if you want to go deep on transformative branding, just buy a copy of Dave’s new book, Marketing, Interrupted.