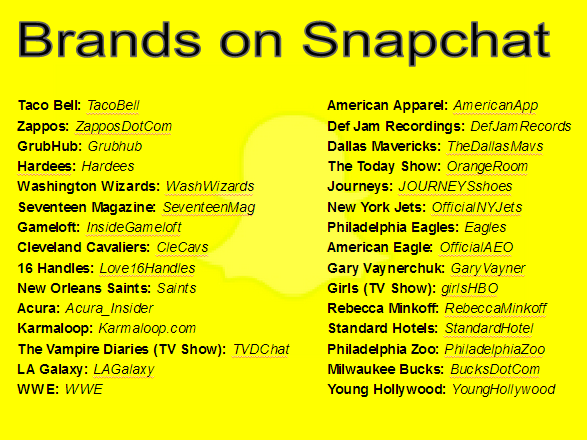 It is no surprise that brands are increasingly turning towards Snapchat, with comScore reporting an increase of nearly 170 percent in the number of multi platform unique visitors between June 2013 and June 2014 — from over 10 million to nearly 27 million. The introduction last year of the stories feature, which lets users stitch together a narrative of photos or videos that lasts 24 hours, and, most recently, the geo-tag feature has made it all the more attractive.

Burger King is the latest brand to take a bite of Snapchat, six months after rival McDonald’s joined the platform. The content of these photo and video snaps as well as snap stories ranges from promotion deals to new-product announcements, behind-the-scenes campaign peeks and even brand stories, quizzes and trivia. Brands also don’t shy away from getting very visual and creative, thanks to the various fonts and filters that the platform offers, and the fact that pictures can also be used as a canvas and painted on.

One of the earliest kids on the block, Taco Bell took to the platform in May 2013 as a means to promote a new item on its menu: the beefy crunchy burrito. From then on, it continued to evolve on the platform. Taco Bell sends out individual snaps to its followers and churns out stories routinely. “At Taco Bell, we love being where our friends are,” said Nicholas Tran, the social media lead of the brand. “But you have to be the right kind of brand and have an edge.”

An unusual adopter, NPR has been on the platform since October last year, when it sent out its first snap celebrating the 75th birthday of the copy machine. Nowadays, it brings its followers an offbeat fact from one of its reporters in a short and fleeting 12-second video snap, sending one a day on average. “Everybody has 15 seconds,” said Melody Kramer, NPR’s digital strategist. “And if it’s not working out, you can just stop it.”

DoSomething.org, an organization that spurs young people to action on various causes recently anointed a “snapmaster” and started incorporating Snapchat into its marketing efforts. Now, what those at DoSomething call their “choose your own adventure” Snapchat stories are driving engagement into the nonprofit’s campaigns. Snapchat is also creating events that people and businesses can contribute to. Snapchat acts as an aggregator and curator and puts out a story for an event that anybody in the area can see. Is your favorite brand on Snapchat?  Remember to check back Thursday as we start our series on creating a social media marketing plan from scratch. And as always stay #TopRight!