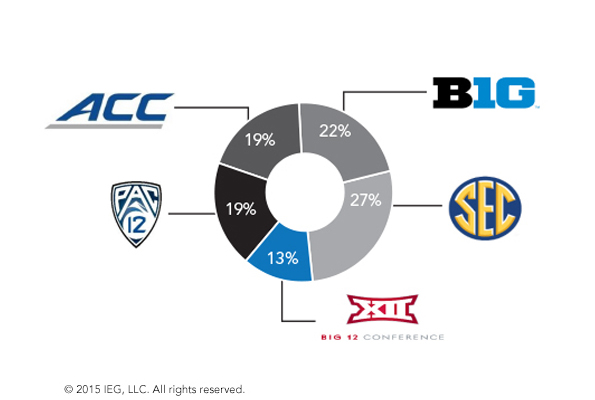 Whereas the NFL used to be the sole sweetheart of TV networks, NCAA football is the little darling.

The introduction of Conference TV networks and the recent restructuring of the College Football Playoffs has helped skyrocket the earnings of elite athletic programs. Not surprising, TV networks and sponsors want winning teams with big fan bases. And they’re willing to pay for it. TV Network Spending Each conference in the Power Five brings in a base of $50M each from TV deals while the smaller conferences in the Group of Five split a total of $75M.

This is a direct result of the fact that networks see the value of those brands. Sponsorship spending on college athletics totaled $1.1 billion in the 2014/2015 season, a 5.9 percent increase over the previous year, according to IEG research. The uptick is largely driven by new and incremental activity around the College Football Playoff. Sponsors want to align with a team that wins, gets prime-time slots, and has a strong fan base.

The ‘Luck’ of the Irish

Then there’s the bowl games. The differences in payouts for bowl game appearances are staggering. In 2014, the SEC earned more than any other conference in postseason football revenue with $51.5M from Bowl Games. A $30M payout for Florida State and Clemson appearances in the BCS Championship and Orange Bowl helped the ACC net $46.6M.

How much of an advantage do these corporate sponsorships and network deals give schools in the Power Five Conference?

Well, in financial terms, there was an $89.7M gap between the fifth and sixth most valuable conferences in 2014.

American More money means nicer facilities, better coaches, stronger recruiting, and the list goes. But how does this impact the school brand overall? Does it increase enrollment? Decrease tuition? Improve the quality of education? Increase job opportunities for graduates and alumni?

The Unspoken Cost of Athletic Glory

“Why should we have to go to class if we came here to play FOOTBALL We ain’t come to play SCHOOL classes are POINTLESS.” ~ Tweeted by Cardale Jones, Ohio State star quarterback in 2012.

—just to name a few.

In 2014, it was discovered that the University of North Carolina had Two Decades of ‘Paper Classes’ where more than 3100 students participated in no-show classes—with over half of them being athletes. While most colleges insist that athletes and non-athletes have the same academic standards for admission, this simply isn’t true. In 2014 Mark Schlissel, University of Michigan’s president, was in hot water for his (truthful) comments on recruiting when he said, “We admit students who aren’t as qualified. And it’s probably the kids that we admit that can’t honestly, even with lots of help, do the amount of work and the quality of work it takes to make progression from year to year.”

Based on a study of the top 10 elite athletic programs, Princeton researchers found that being a recruited athlete gave an admissions boost equivalent to scoring 200 points higher on the SAT. Yet, for other schools, boasting to be the true home of the scholar-athlete is far more important than winning.

But how much time can an athlete truly devote to school when he/she is practicing over 20 hours a week and taking a full load of classes at an elite university?

“The more we emphasize athletics, the less time students have to spend on academics.”

~Jeremy Majerovitz, “The Price of Athletics at Stanford”

Clearly this is a hotly debated issue. What do you think? Do the benefits to brand and bottom line outweigh academic concerns? Why or why not? Share your thoughts in the comments below.

Signup for blog updates here and follow us @TopRightPartner for ideas on how to #MoveTopRight.