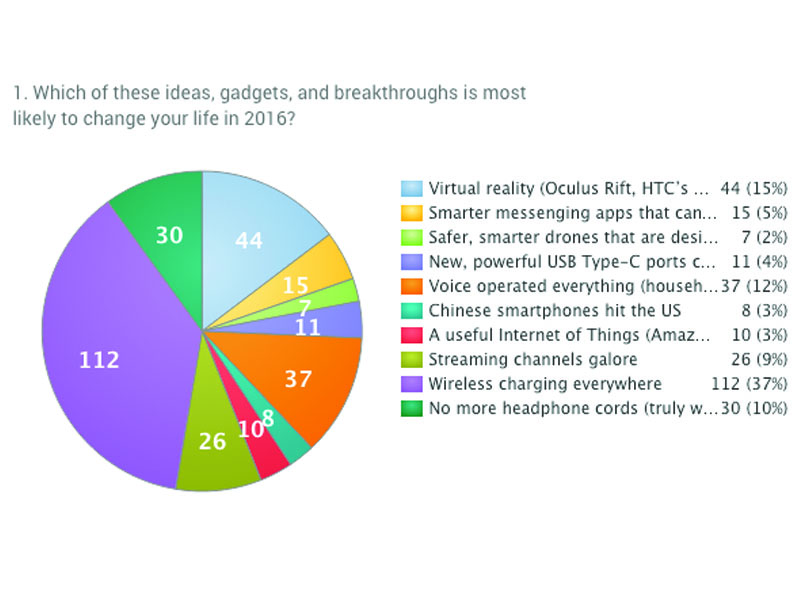 Imagine to never again fight other passengers for an outlet at a busy airport charging station or to jocky for a table at Starbucks because of its proximity to an electrical outlet. Over one-third of Americans said wireless charging everywhere would bring positive change to their lives—more so than smart, self-flying drones; virtual reality; or a better connected “Internet of Things.”

Inspired by the WSJ article “The Tech That Will Change Your Life in 2016,” we conducted a survey to see what you think will be the most life-changing technology in 2016. Here are the results.

Which of these ideas, gadgets, and breakthroughs is most likely to change your life in 2016?

Of the 300 people surveyed, 37 percent indicated the most life-changing technology of 2016 will be wireless charging everywhere. The coffee giant Starbucks already has tables that charge devices wirelessly, and GM, Toyota, and Audi will soon have it in cars. As wireless charging becomes mainstream, devices will be capable of much faster charging speeds than what is currently available.

The much-anticipated and long-awaited arrival of the Oculus Rift headset this Spring makes virtual reality real. Followed by the release of HTC’s Vive and Sony’s PlayStation VR, gamers everywhere are overjoyed. But the appeal goes beyond games and flights of fantasy— 15 percent of respondents said this is 2016’s most life-changing tech. Imagine front row at an Adele show, a seat at that meeting you’d otherwise miss, or a virtual reality movie.

Gone are the days of asking Siri what time it is and receiving search results for “cat litter near you.” This year, voice-operated devices—voted #1 by 12 percent of Americans—are expected to take a quantum leap in accuracy and intelligence. Amazon released Echo and Microsoft’s Cortana virtual assistant made waves in 2015 for Windows 10 users. With Siri and Google Now already in cars and TVs, voice control is expected to appear on more computers, gadgets, and toys.

We are surrounded by stunning advancements in science and tech yet we are still plagued by tangled headphone cords. In fact, 10 percent of survey participants responded that wireless headphones would be the most life-altering advancement. While bluetooth headphones have been around for a while, this is the year we see truly wireless earbuds—Bragi Dash and Alpha Skybuds don’t even need a wire to connect between your ears. Does this mean the headphone jack is the next thing to disappear?

While I don’t expect to a “CBS and Chill” meme (or euphemism) anytime soon, it’s obvious TV networks have seen the power of online streaming. Survey results prove that customers want to be able to watch their shows anywhere: 9 percent say more streaming channels is 2016’s big win. TV executives have realized the importance of being where the customer is and you can anticipate local stations and more cable-only networks to offer streaming versions of shows in the coming year.

Check out the full list of predictions in “The Tech That Will Change Your Life in 2016” by Geoffrey A. Fowler and Joanna Stern.

What life-changing tech breakthrough would you add to the list?

Please share your thoughts here or tweet your thoughts to us @TopRightPartner. Signup here to receive blog updates about how to #MoveTopRight.