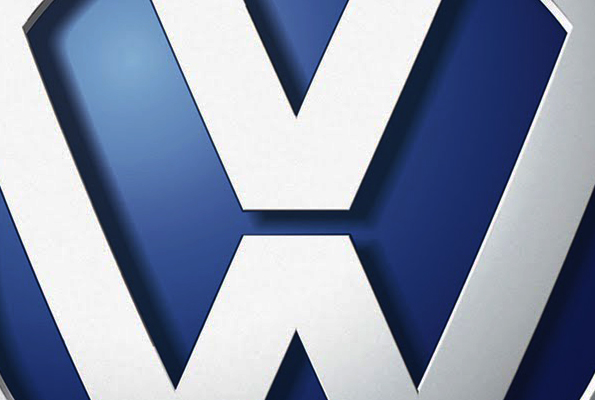 In Frankfurt this morning, just over a week after Volkswagon CEO Martin Winterkorn stepped down in the wake of a growing scandal involving some 11 million diesel vehicles equipped with software that cheated emissions testing, company officials were talking with reporters about customer’s capacity for forgiveness, returning to core values and focusing employees on objectives.

Here in America, things are not quite so rosy.  The EPA is getting ready to impose major fines, and if it turns out that VW deliberately changed the emissions detectors in their cars, they may face criminal charges. The US Justice Department said that it was “Working closely with the EPA.”  There have even been consumer advocate calls for all automakers to make all the software that runs the vehicle open source, potentially erasing some competitive advantage (and hurting the dealer service center).

One media pundit, Tom Ashbrook, is not waiting for the verdict to damn the company reputation, already describing it as “The Big Cheat” in a promo for his On Point radio show:  “The story of Volkswagen’s big cheat on automotive emissions has gone from big and unbelievable to huge and kind of astounding. Eleven million cars equipped with lying software when it comes to their pollution. A CEO, out. A criminal investigation called for. One of the world’s very biggest automakers – with a long history and once-lustrous reputation – facing a completely uncertain future.”

Volkswagen announced it would set aside $7.3 billion to cover the cost of the scandal, but even that may not be enough. The company has apologized, but has not yet detailed who was responsible for the emissions devices.

This brings us to the central marketing challenge in all this.  At what price is trust re-earned once it is broken?  It may be a lot more than $7 billion.

In 1975, intangible assets were just 17% of the market value of the S&P 500. But today those proportions are flippe 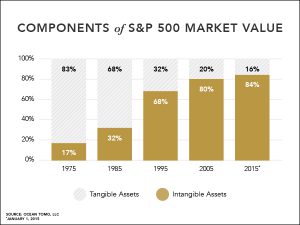 d: Intangible assets now make up 84% of the market value of the S&P 500, according to the Intangible Asset Market Value Study from the intellectual capital merchant bank Ocean Tomo.

The bank’s  Chief Executive Officer, James E. Malackowski commenting on the study, notes that the U.S. market valuation of intangibles may now be at its peak. “Recent realization of the significant impact of the American Invents Act combined with fundamental economic changes suggests to me that we are likely to see a slight rebalancing towards tangible assets in the coming decade.”

The Harvard Business Review explains in an article entitled, What VW Didn’t Understand About Trust, “What exactly is all that intangible value? Some of it is intellectual property. For consumer-facing companies, though, a vast amount of value resides in the brand value, an amorphous measure of how a company’s key stakeholders—its customers and employees foremost—feel about the company or product. Among the many emotions and feelings that tie us to brands, trust is one of the most foundational. How many car buyers will trust VW now?”

What we at TopRight find astounding is that company officials seem to think that such deception would not come to light.  We live in an age where brands are transparent with consumers.  It’s not an option – Americans in particular demand it.  Take the example of what’s happening in the food industry. The rise of demand for “clean labels” that tell us what’s in our food is causing major headaches for old-school food and beverage companies.

Transparency even extends to a sort of “friend-like” status between brands and people, where brand representatives become the face of the company, liking individual’s posts and commenting on personal blogs.   The amount of data that marketers use to personalize experiences has led new generations of consumers to expect the same level of transparency at a product level.   Questions like, “What’s in this? Is it toxic?  How much does your CEO make?” are common today, and brand positioning is more than ever determined not by what the company says, but what it does.

The importance of trustworthiness is exemplified with TopRight client PBS, the nation’s public broadcasting system.   Our recent “Brand Health” project revealed that 9 out of 10 people trust PBS and PBS KIDS is considered the safest place for children to watch television.   “Not only is intent to watch influenced by trust, but the willingness to donate to PBS and its member stations is driven by the high levels of awareness and alignment with personal values that are integral elements of the PBS brand,” says TopRight founder and CEO Dave Sutton.  “Most important, PBS doesn’t just hang this trust score on the wall and swell with self congratulations.  They operationalize trustworthiness every day – in daily operations, in product planning and in their marketing communications.

“It’s not enough to earn a high score – you have to keep earning it, every day, and that means it’s got to be shared with employees who are empowered to walk the walk.”

On some level, it all comes back to a harsh reality: trust in all institutions, business in particular, has been eroding for years, according to the HBR article.  Consumers are skeptical first, and less likely to trust without cause.   Let’s face it:  You’re probably just about as likely to get struck by lightning as you are to click on a banner ad.

None of us know where this will lead for VW or for other car companies, which may now become suspect of doing the same thing.  We hope that every car company in the world is doing their own internal investigation right now, to make sure that nothing scary is hiding under the bed.  Once those monsters come out and destroy a reputation, it’s a long, hard road to rebuild trust.

The TopRight methodologies for brand narrative development and optimizing The Customer BuyWay™ both are centered on authenticity.  Experience shapes the brand story and value, not the other way around.  As intangible assets increasingly monopolize the customer relationship, the need to be fiercely authentic and transparent becomes an imperative for all customer interactions.  Data certainly provides the fuel for insights, but it’s people who decide what to do with those insights.  We can all quickly see from VW’s mistake that values-driven companies will be the only ones remaining in the #TopRight quadrant of consumer trusted brands.